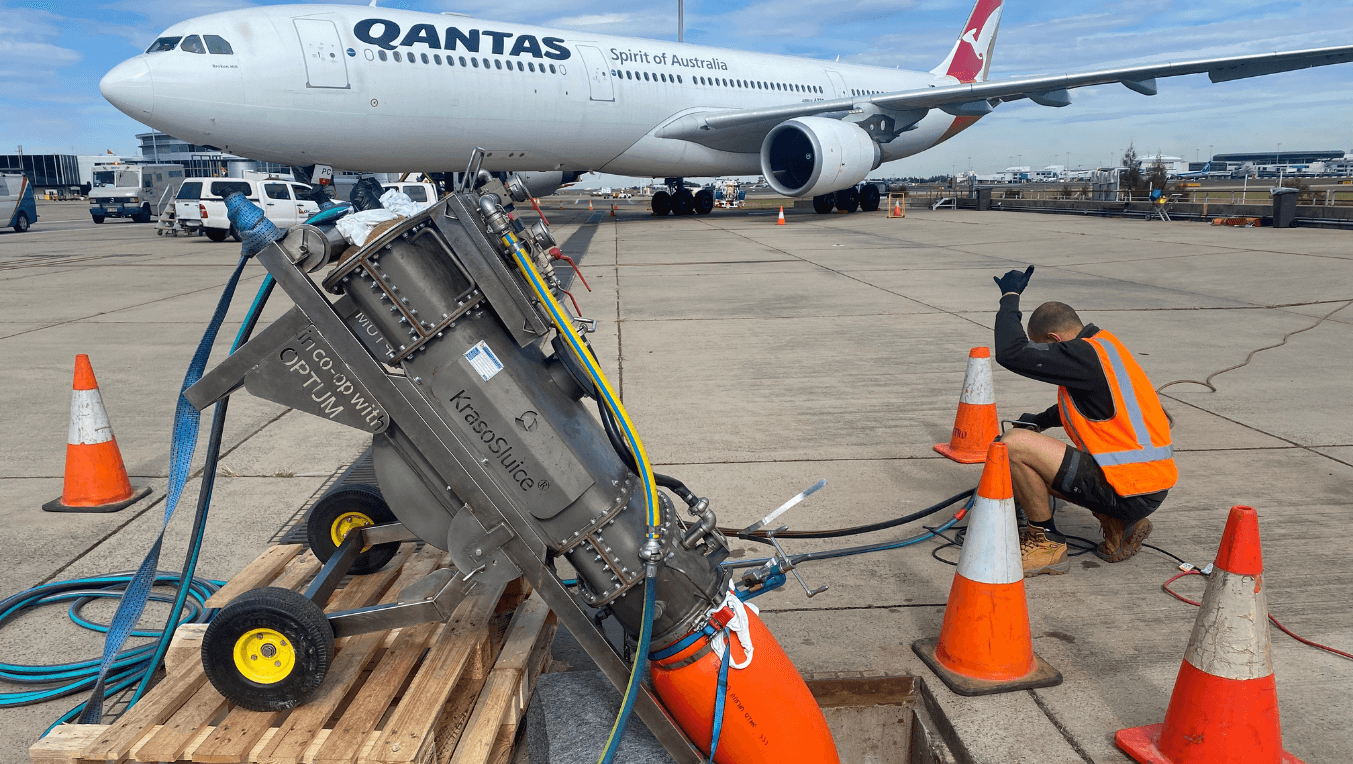 Excavation and the replacement of underground pipes typically present considerable implications in terms of cost and risk. That was certainly the case when Pipe Relining Solutions attended one pipe repair in Sydney’s South. In fact, the issue threatened to ground the operations of one of Australia’s major airlines.

Qantas has the largest fleet of any of Australia’s airlines. Established in Queensland way back in 1920, it’s the third-oldest airline on the planet and is based in several buildings and facilities built around Sydney Kingsford Smith International Airport. Qantas is the biggest carrier in the country, operating both its flagship international brand and Jetstar, which runs primarily domestic services.

The Problem: Cracked Pipe Work in Sydney at the Qantas Jet Base

Earlier this year, Qantas faced a challenging problem. The company had a sunken 300mm diameter pipe on its hands, running below one of its main facilities and with major cracks along a 20 metre length. Anyone who has ever flown into Sydney will know that the airport is right next to the ocean. The airline’s Jet Base sits on Qantas Drive in Mascot and presents a very fast-moving, potentially hazardous working environment.

Jet Base is a primary hub for Qantas, with aircraft of all sizes landing, taxiing, refuelling, and departing on a regular basis. Shutting the facility down, digging up runways and taxiways to replace a broken pipe would have proven decidedly troublesome, not to mention hugely costly. Compounding the challenge, there are two lakes in close proximity, meaning the repair needed to be clean and safe.

Underground pipes can move and become damaged for a variety of reasons. In the Qantas case, groundwater had caused the pipe to sink over time. Inspection revealed that every single joint in the affected area also had cracks, so traditional local repairs wouldn’t be an option.

Not only that, but toxic fire retardant material had already begun to leak from the pipe into the ocean, threatening local wildlife and the pristine marine environment. The matter needed urgent attention and a suitably eco-friendly remedy. The airline approached Pipe Relining Solutions with a request to find a suitable, cost-effective option, allowing aircraft to keep moving and operations to continue while a comprehensive, permanent repair could take place.

Like many operational issues, the leaking pipe and resulting impending environmental threat left the airline with an urgent decision to make. Qantas needed a long-term solution, but digging up the old pipe for replacement would have meant a complete shutdown of its facility. Grounded aircraft are extremely expensive, so the company needed to avoid excavation wherever possible.

Qantas also needed an option that could be safely completed by a relatively compact crew working safely and efficiently near the paths of moving aircraft. Qantas ultimately decided on pipe relining at Sydney airport because it offers several advantages over traditional pipe replacement:

Pipe Relining in Mascot for Qantas: How we kept an airline flying while we fixed cracked pipe work

With any pipe relining repair, the first step is to clear the damaged line. We use a high-pressure water jet to accomplish that and prepare the pipe for its new liner. Once we’re satisfied that all obstructions and debris have been removed, we cut a textile liner to length. That gets impregnated with a specialist resin – and Pipe Relining Solutions only uses environmentally friendly materials.

We insert the pipe reliner using compressed air. The final stage of the process is to pump hot water through the liner to inflate the material, so it adheres to the interior of the existing pipe and joints. The hot water cures the resin to make it hard and strong. We leave the liner overnight to complete the repair.

Compared with pipe replacement, pipe relining equipment is compact and portable. Even repairs to 300mm diameter pipes can be completed by a relatively small team – making it the ideal option for areas with high foot or vehicle traffic – or even lots of airplanes!

How to get a pipe relining quote in Sydney

For fast, efficient, eco-friendly pipe relining in Sydney, don’t put up with the high costs associated with pipe replacement and excavations. No matter how challenging the environment and even if you’ve already had sky-high repair quotes, give Pipe Relining Solutions a call on 1300 366 834. We promise to provide a solutions-oriented service and minimise disruption to your home or business.

And don’t forget, you can also use our quick and easy enquiry form to request a local pipe relining quote. We provide informative, comprehensive pipe relining quotes in New South Wales, and we complete pipe reline jobs safely, quickly, and conveniently – no matter where they are!