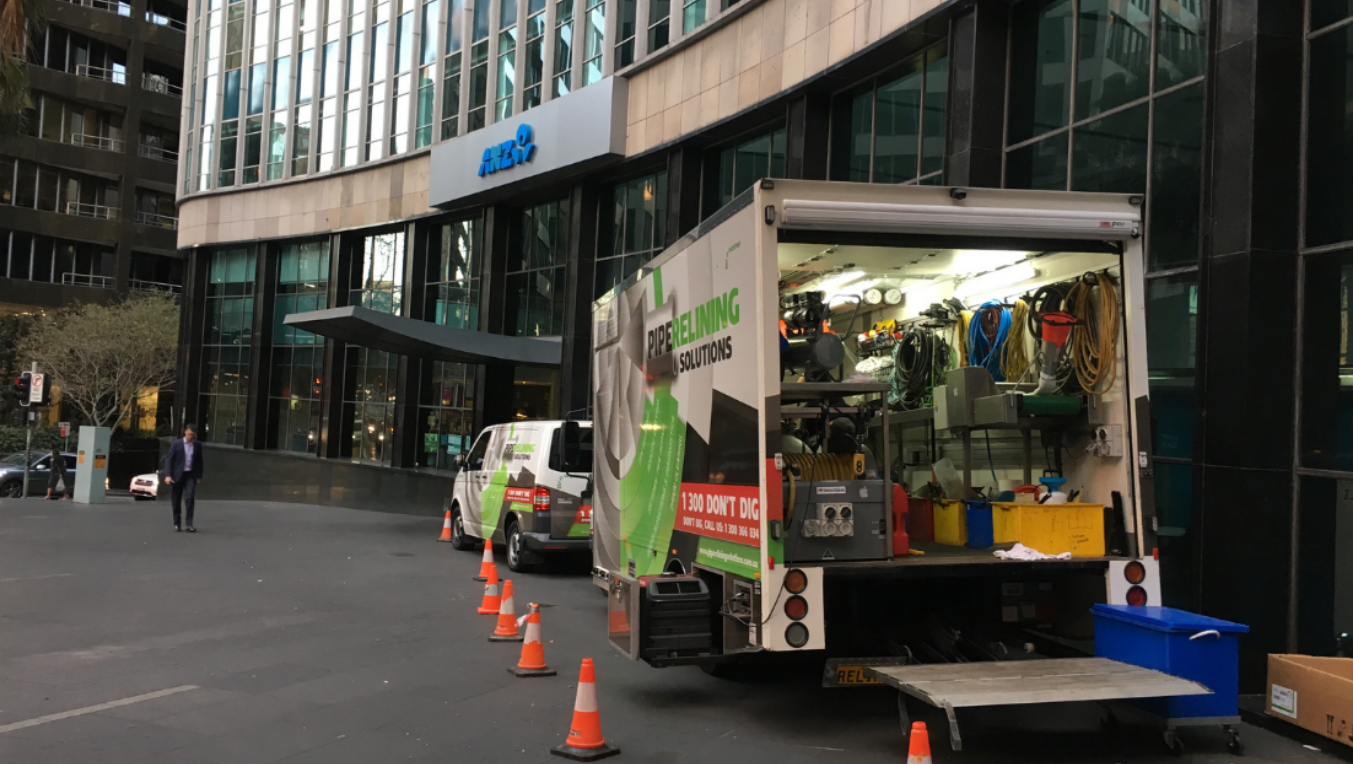 When water started leaking into the ANZ building at 1 Chifley Square, Sydney CBD, it needed fixing fast. This would be the longest and highest vertical reline Pipe Relining Solutions had ever taken on.

Damaged down pipe in the sky

When a 100mm internal steel down pipe rusts on a 17-storey building, you have a big problem. Water was leaking into one business and causing internal damage and disruption to the workplace. As the rust continued to damage the pipe, more offices were going to be next. To replace the down pipe, at 50 metres long, would mean removing the building cladding, erecting scaffolding and starting a long process. There was no guarantee that approach would work -a big investment was needed to see if the pipe could even be replaced.

By putting a CCTV camera down the drain, Pipe Relining Solutions assessed the pipe damage and took the building managers through the exact condition of the pipe. Pipe relining was an option, but it was going to be a challenge for the team.

What is pipe relining?

Pipe relining is the smart alternative to pipe replacement. If replacement is impossible, you have limited time, or you don’t want to manage digging and the mess it creates, it’s a perfect solution. The result is a completely new ‘pipe within a pipe’. It’s 100% watertight, stronger than PVC pipe, and has a faster flow rate than most existing pipes.

The specialist team came up with a plan to reline the down pipe, with a single liner in a single day. The fix was a complete reline from top to bottom – from the roof to the end of the pipe at street level. This fix had its risks and its challenges. Relining equipment and materials could only be carried up the stairs to the roof outside business hours. To fix the pipe, a 50-metre liner was needed – when impregnated with the relining resin, it weighted over 100kg. If the relining didn’t go to plan, there was no way to remove the liner.

The team planned and weighed up all risks and potential issues. leaving nothing to chance.

Step 3: Invert the liner into the pipe using compressed air, for a completely relined pipe from roof to street.

Step 4: Pump hot water through the liner to encourage the liner to cure quickly, sealing the defects and protecting it for a least 50 years to come.

The job was completed in one day, with no mess and no disturbance to the building occupants. It saved the inconvenience of managing a pipe replacement including mess, cost and disruption to the building’s tenants. When the liner was in place and the resin had sealed, the CCTV camera was used to check the liner, and to provide peace of mind to the building mangers that it had been a successful fix.

The issue was resolved, preventing further water damage to the building, and building management have a proven method to get on top of any future down pipe issues.

Talk to the team who loves a challenge

The Pipe Relining Solutions team thrives on finding solutions to tough problems. Call us today on 1300 366 834.